A Facebook user who wishes to remain anonymous has shared the story of how a mechanic was wrongly accused and killed by a police officer in Port Harcourt while his apprentices are still in custody.

The Facebook user said he gave his car to the mechanic to fix his AC gas on the 19th of December 2019 and called the mechanic to get feedback about his car on the 20th but there was no reply so he decided to check on him. He got there only to find out his car and the mechanic was nowhere in sight and then asked a fellow mechanic about his whereabouts and was told that he was arrested by some policemen for passing a one-way lane. He was happy, believing that policemen were friends and they were both ok and then started his search to find the police station they were taken to until he got to mile 1 police station where he saw his car parked at the front of Eagle Crack Police Division. He went inside the police station and presented himself as the owner of the car parked outside and was surprised by how the policeman pointed a gun at him and was asked to leave immediately or he dies. He got home and started drafting how he was going to handle the matter when in exactly 2 hours, someone knocked on his gate and a young man appeared saying his name was Obinna, the brother to the mechanic Chima.

Obinna said his brother (the mechanic) sent him to narrate how they were wrongly accused by the policemen. He said Chima the mechanic and his apprentices were testing two cars; his and someone else’s.

They took the cars on the road and found out the traffic was so much then decided to take one-way. On the way, they were stopped by some officers who asked them for money and since it was during the festive period they wanted more and the men were not complying so the officers immediately changed the case to a criminal case and told them to come out of the car for a search. They found money in Chima and the other boy’s pocket and the total of it all was N150,000.

Chima and the other guy were handcuffed and their money and phones were taken from them. They were bundled to the police station where they were all beaten almost to death. The youngest of them who was only 19 could not withstand the pain and had to comply with the lie the officers told him, saying the car was stolen and it belongs to a lady.

The Facebook user then contacted the Nigerian Air Force and told soldiers to accompany him to the police station. They got there and the IPO was very antagonistic towards them, saying the case was a civilian case and a robbery. The Facebook user had to call the Commander to follow him on the 23rd of December and when the IPO was asked why the boys were still in custody he said they stole a lady’s cars and were on their way to sell it when they were caught.

The IPO then asked the young boy who made this confession to come forward. The boy was brought in, seriously bruised and when asked to confess again he said he was only an apprentice and the car belonged to his boss’ customer and the only reason he lied was that he was beaten almost to death. The boy was sent back and his car document was requested.

On the 30th of December, the Facebook user returned with the necessary documents of his car and the car was released and when he asked for the release of the men, he was told that they were under investigation in a case of cultism. He then left the station.

On the 2nd of January 2020, he got a call from a barrister who was on the case saying  Chima was tortured to death and the corpse was not given to them. When they demanded bail for the remaining guys, they were asked to come the next day. On getting to the police station they found out that the commander had charged the boys that same day for robbery and cultism even after verifying the car was never stolen. When the parents of the boys came to court to see a copy of the charged sheet confirming the police wrote on it that the owner of the car which was the Facebook user said his car was stolen by them, which was never true and his car was never robbed.

The families of the boys are still not allowed to see them.  Even taking pictures, they were asked to pay N15,000 and they can’t even afford a lawyer to take the case. Chima just got married six months ago and his wife is pregnant.

Below are the names of the victims: 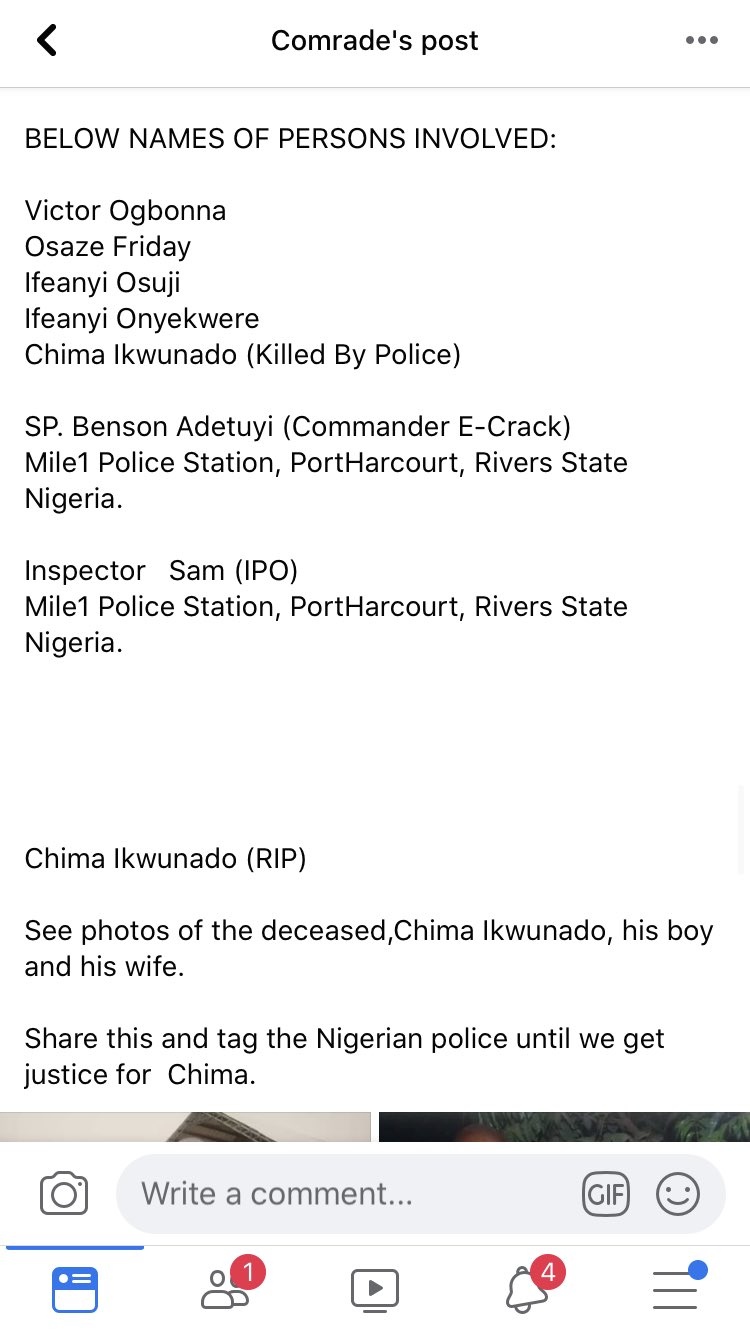 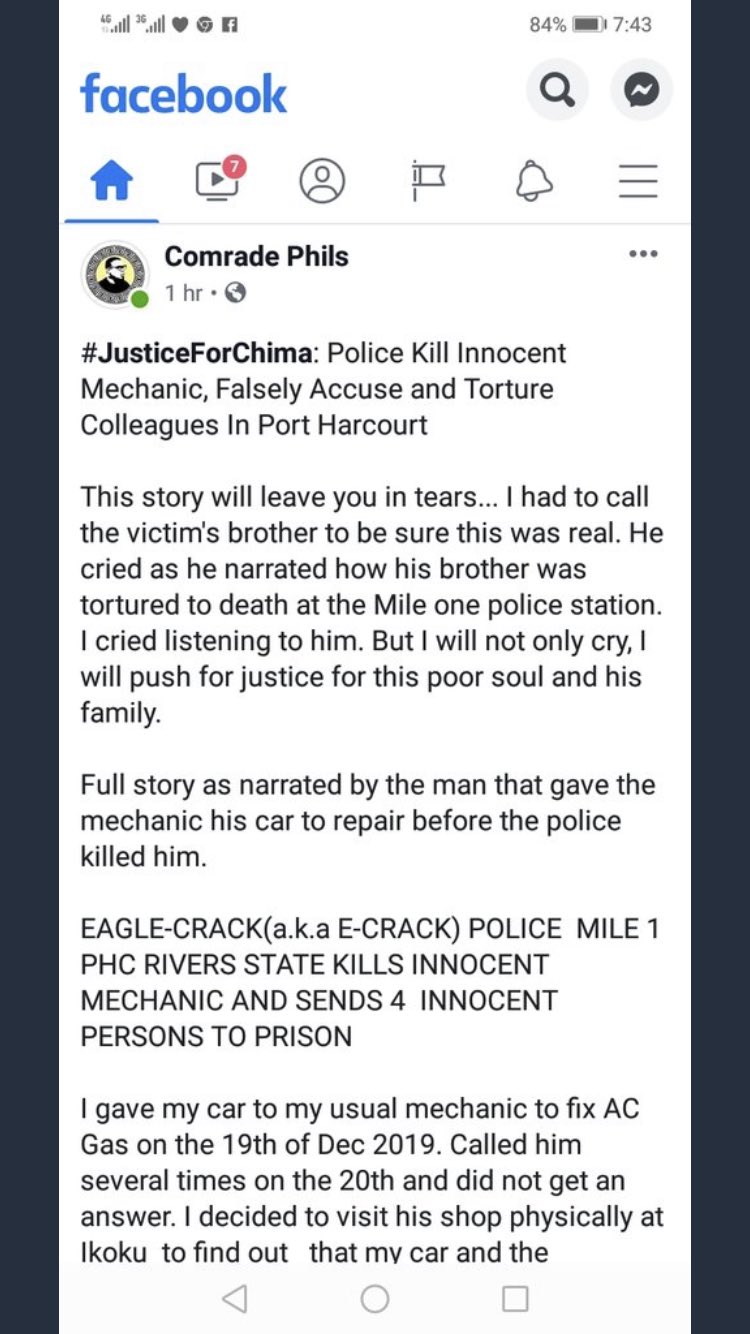 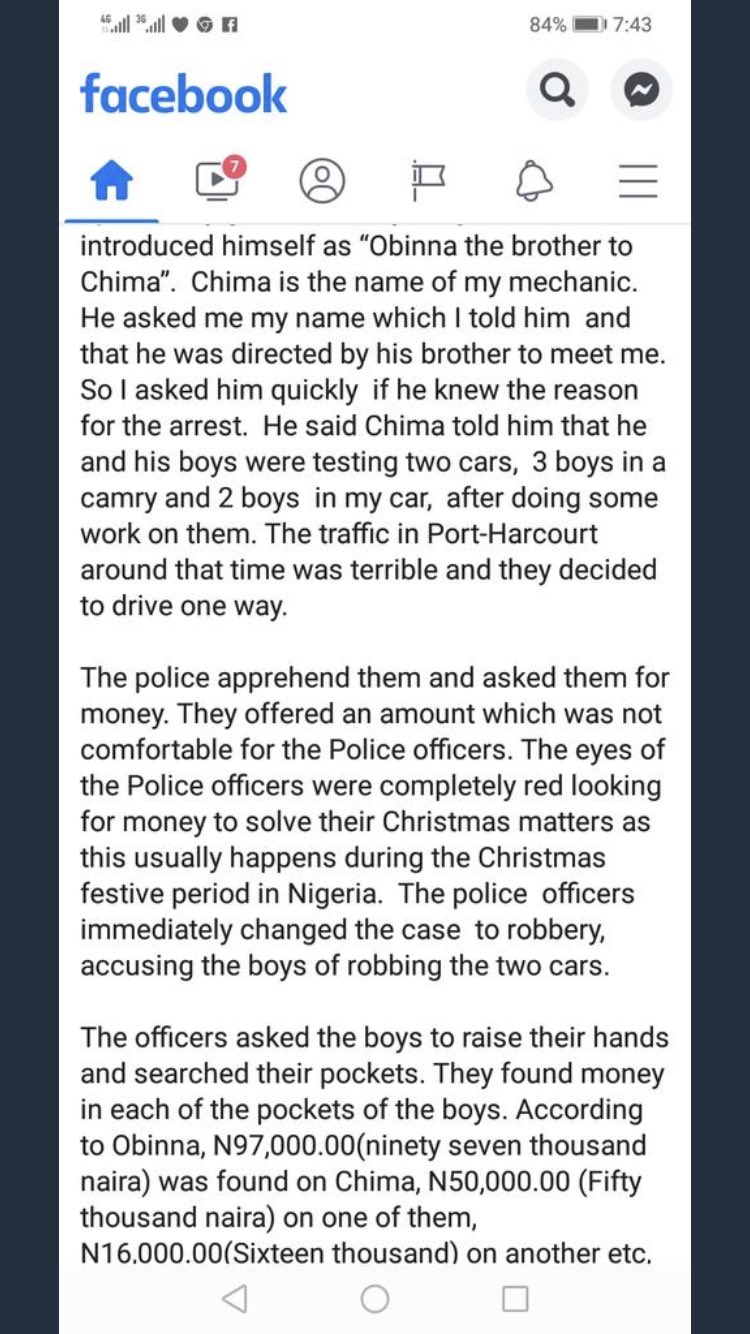 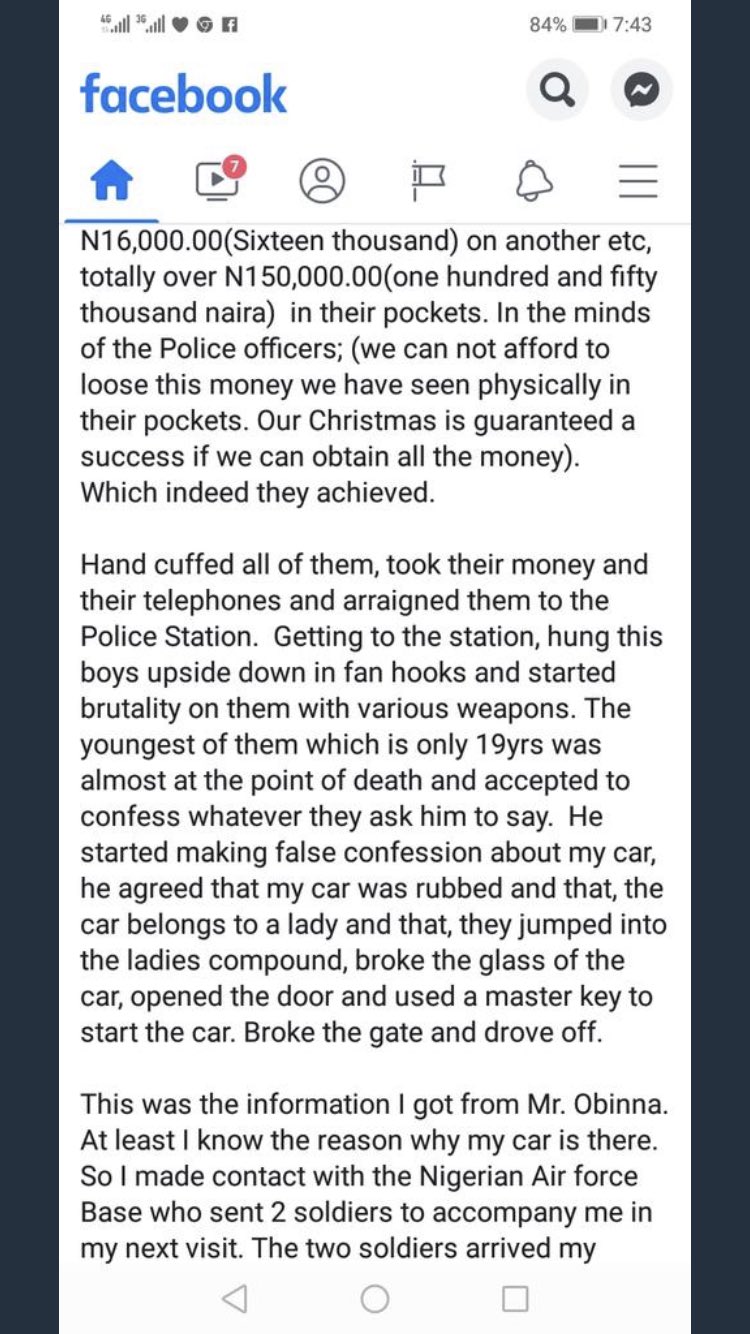 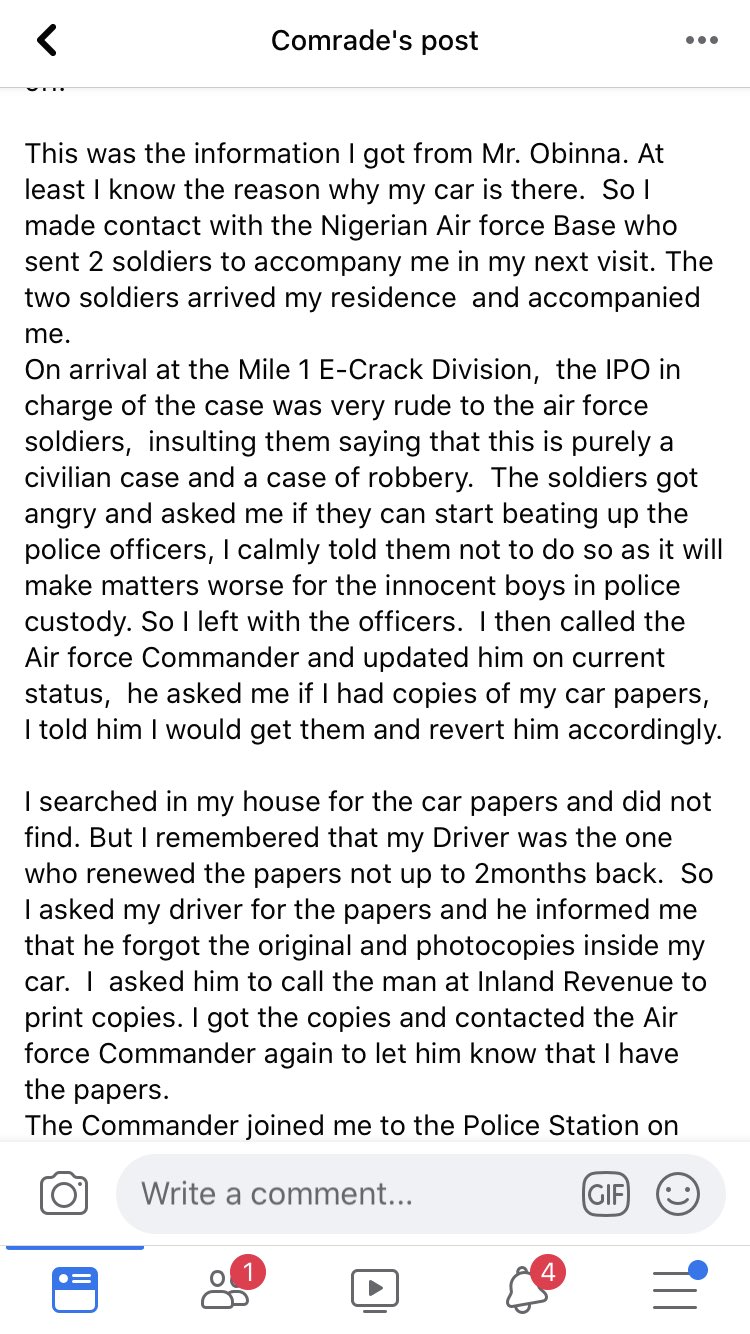 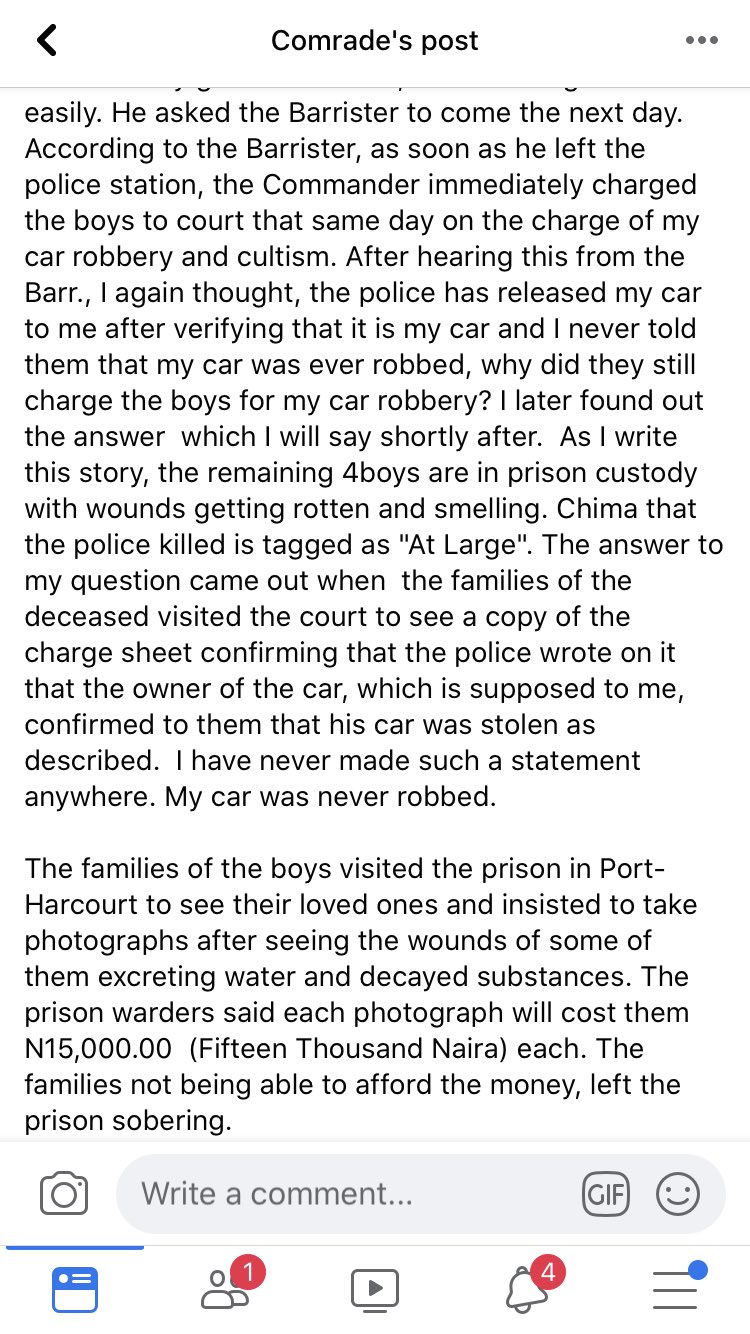 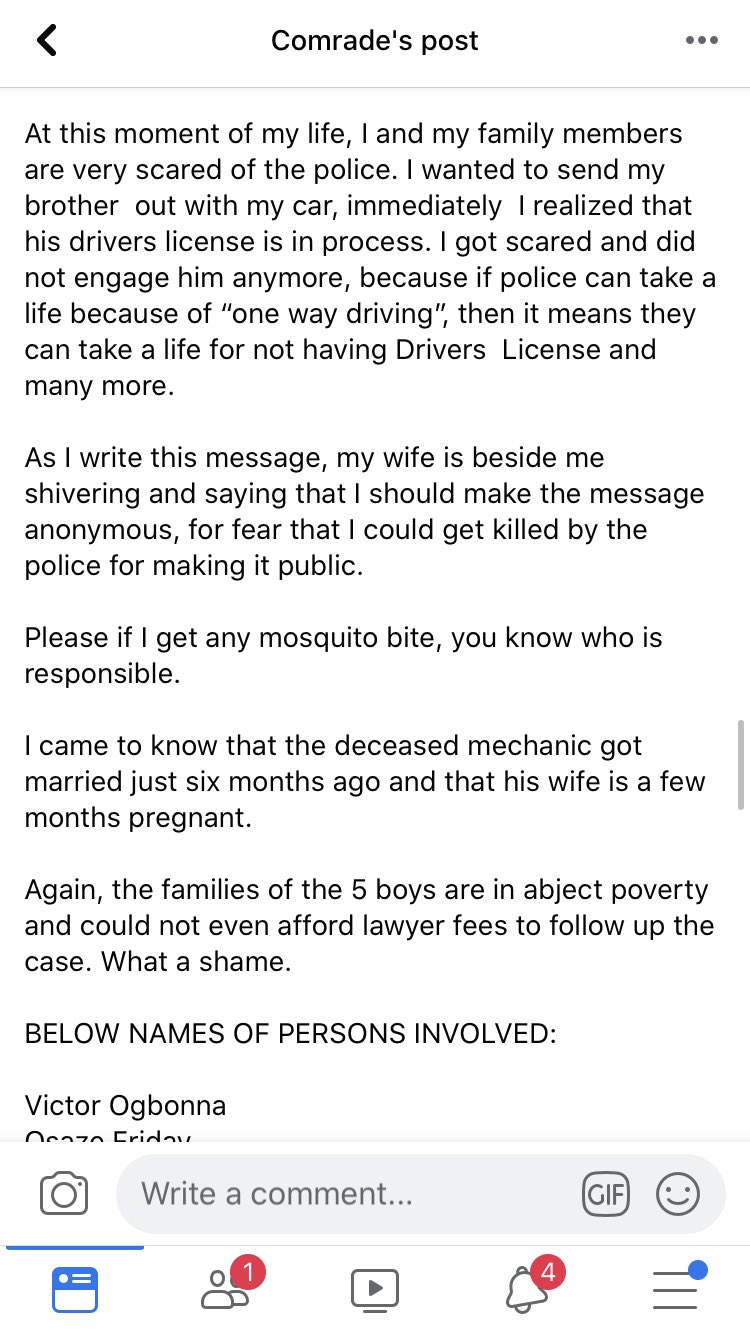